The Melbourne Inner North Performing Arts Academy prides itself on incorporating a range of music teaching methodologies into all lessons including Kodaly, Orff & Feierabend.

The Kodály Concept was inspired by the philosophies of the Hungarian composer and educator, Zoltan Kodály (1882 – 1967). Throughout Kodály’s writings are the notions that a person cannot be complete without music and that music serves to develop a person on all levels – emotionally, spiritually and intellectually.
Kodály believed that every person has musical aptitude and that, ideally, a music education should begin as early as possible in a person’s life – firstly at home and then later within the school curriculum.
Kodály believed that singing should be the foundation of all music education.
“It is a long accepted truth that singing provides the best start to music education; moreover, children should learn to read music before they are provided with any instrument…even the most talented artist can never overcome the disadvantages of an education without singing” (Kodaly, 1974).
The use of the voice is one of the most defining features of the Kodály approach. The voice is the most accessible of all instruments and this makes it most suitable for musical instruction and can lead to a highly developed musical ear. By focusing on learning through engaging with music, singing, playing, moving and enjoying, music becomes part of the natural learning process.
Developmental, Sequential, Cumulative and Continuous Music EducationKodály believed that musical instruction should reflect the way that children learn naturally. Through singing games, fun and play the child discovers the musical elements as they are presented sequentially and has the opportunity to enter the world of music through the creative development of the ear and the eye.
The Kodály Concept within the Australian ContextSince its introduction into the Australian context the influence of the Kodály concept has been significant in the areas of early childhood, primary and secondary education. Research and training have underpinned endeavours in the ACT, NSW, Queensland, Victoria, South Australia and Western Australia and have encouraged many teachers to strive for a better musical future for their students. 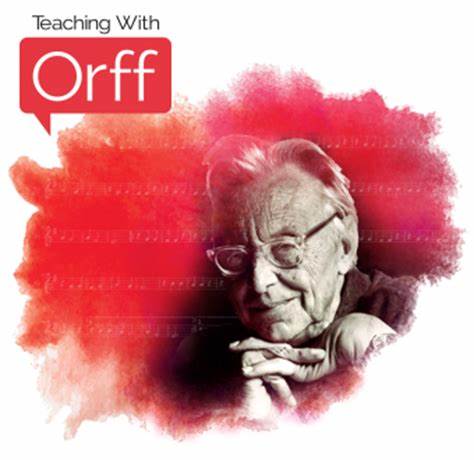 What is ‘Orff’?Orff Schulwerk is an approach to music education that was developed in the 1920s and 1930s by the German composer and educator Carl Orff and his colleague Gunild Keetman. People often shorten the name to ‘the Orff approach.’ This approach encourages the student to develop their own compositions from their thoughts and creativity. In a sequenced music education program, the Orff approach recognises the importance of rhythm in children’s early musical experiences. This is fostered through movement and dance as well as singing, speaking rhythmically and instrument playing.
The unification of music and movement, so natural to the young, is the centre of Orff’s concept of music education. The focus is on the development of good listening skills, as fundamentally important to performance, reading, writing and composition skills. It is a holistic approach that empowers the student to take ownership of their learning and is aimed at creative expression.